"Don't worry, you will not have to do anything that's against your religious teachings," I assured them.

I was asked to train them to act for a English Language drama competition. Ah, it's hard work and I had no experience performing this task. I was also told that the teacher-in-charge of training drama last year had suffered from so much stress that she had opted for a different activity this year. Jeeshh..

It's really stressful training students for a inter-school drama competition, especially those from a rural school where English Language is seldom spoken out of the school compound. Working on their pronunciation and intonation is enough to give a teacher nightmares. Alhamdulillah, my colleagues are also helpful and supportive. We willingly sacrifice our time as long as the students themselves are working hard to succeed. All the extra work without extra pay, and the importance of keeping one's cool with the sometimes playful students could be tough at times. Sure, there're times I wish I could strangle them for various reasons, hahaha.

Now, how to prepare the students to act and speak in a second language, and at the same time, ensure that they don't stray from Islamic teachings?

They are volunteers and although some may aspire to become actresses or stage performers, I choose only those who are willing to give their full commitment. The main aim is to learn to act on stage, have fun, and learn to work as a team. If they do well, insyaAllah they'd win a prize. More importantly however,is that they improve their command of the language while gaining the experience of acting onstage.

Acting is a good way to learn a language, but special care has to be taken to ensure that there is not free mixing of the opposite sexes. I keep reminding myself that I'm a Muslim, and those on the stage are Muslims too. No unnecessary touching. I have to be careful not to include any element of syirik in the story. Costumes for the actors and actresses have to be carefully selected so that with some adjustments, their aurat would still be covered at all times. The girls have to cover their hair with tudung; no compromise. I want them to realise that they can still act in a drama while maintaining their Muslim identity.

"Hold my hands properly! My arms are covered with long sleeves, so why are you still hesitant? You're supposed to be acting!" one of the main actresses scolded her friends.
I looked at them,"Do you need gloves?"
The young men grinned and shook their heads.
"No la teacher, actually they are scared of me. But I want them to act normally, not tugging at my sleeves like (they did) just now! They're supposed to be guards, not clowns! "
I couldn't help laughing.
Who says teaching is a boring job? 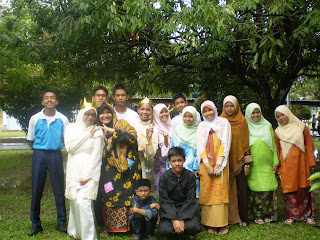