FUN AND FRIGHT AT BERASTAGI

"Ya Allah, please allow us to arrive safely at Berastagi!"
It was almost dark, 6.20 pm Indonesian time and we [husband, our driver Pak Ramadhan, and I] were stuck in a traffic jam at a slope on the way to Berastagi.

We had left Parapat in the afternoon and stopped at Sipiso-piso waterfall for a short rest and to marvel at the of the beautiful waterfall about 200m high. 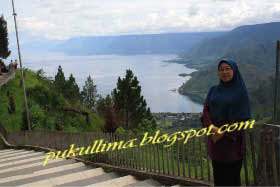 Subhanallah, the scenic view of Lake Toba from the area was simply beautiful. There we met many Malaysian tourists who were just as happy to meet us. It was cool up there, and being a little hungry, we entered a Muslim coffee shop, hoping for some banana fritters and coffee [haha, I miss my pisang goreng]
"Pak, we only sell fried rice," said the waitress to my husband. "There's a shop selling banana fritters but it belongs to Kristians."
"Why don't you sell banana fritters yourself? I'm sure many Muslim tourists especially Malaysians will buy from you."
"If we sell banana fritters, we need to fry them here. Who's going to look after the rice stall? There're only two of us working here" the owner, a Muslim wearing a skullcap replied.
Needless to say, we sighed. Husband spent a few minutes giving suggestions to his Muslim Indonesian brother on ways to improve the business, especially as it was the only Muslim coffee shop in the popular tourist spot.
The couple thanked us as we left to continue our journey to Berastagi but I'm not sure if they'd follow our suggestions.

All the way to Berastagi, we passed by fruit farms, wooden houses, churches and small coffee shops. It was raining. A rather uncomfortable ride as the road has many pot-holes.
"Pak Ramadhan, what is B1B2?" we asked the driver as we saw many signboards with the words.
"Oh, B1 means babi panggang [roasted pigs], while B2 means daging anjing [dog meat]."
Then we remembered that the folks there are Christians.

"Now why are all the vehicles stopping there?" grumbled Pak Ramadhan as we came to a crawl.
"The van in front can't move forward up the slope coz the lorry from the opposite direction is unable to come down, stuck at the junction,"I said as I had a better view from my rear seat.
Little did we realized what was actually happening.
After almost 30 minutes of slowly moving towards the junction, we found out that the heavy rain had caused water to flow heavily from higher ground, making the road dangerous for vehicles.
Rain had caused the road to be flooded.
Water was gushing down the slope like a waterfall. The road had become very dangerous to travel on with vehicles on the left side trying to move up the slope and those on the right side trying to move down the junction. And our Kijang car was stuck because there were other vehicles in front and behind us.
"Pak, have you been in this situation before?" we asked the driver.
"No, this is my first experience being stuck this way," he replied with a worried frown.
The Kijang car in front of us was facing some mechanical problems. Its clutch no longer worked, so one of its passenger had come down, dug some big stones from the road and used them to continue the journey uphill.
Yet despite the flood and still heavy rain, motorcyclists continued their way up the slope. They helped to shift big stones from the middle of the road, for which we were thankful.
6.30 pm turned to 7pm and we were still stuck there. I was beginning to feel cold and hungry, and was thinking of the possibility of having to spend the night in the car instead of a hotel in Berastagi. Thankfully the little one in my womb behaved himself during the worrying journey.

Alhamdulillah, inch by inch, we managed to go up the slippery road safely. By the time we reached our Grand Mutiara Hotel in Berastagi town an hour late, we were tired. The lovely dining hall of the hotel with a delicious dinner somehow calmed our nerves before we retired for the night. 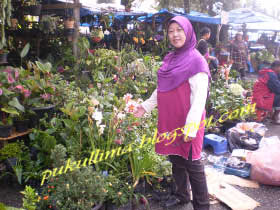 The next morning we went to explore the town. Berastagi is famous for its fruit stalls and flowering plants as well as horse rides.
"Let's take a ride on the horse carriage," I suggested to my husband.
A young Muslim chap approached us and we got onto the 2-seater carriage. Washii was the female horse's name, and during the-10 minute ride around town, we found out that she was to work from morning till evening, and was fed grass from 6pm till 6am daily.
I was too scared of falling from the horse [ in my pregnant state] to ride one on my own although the youngsters assured me that it'd be safe. So hubby went for a ride alone on Kembang Ayu and enjoyed it, hehehe.

"Ah, I know what that is," I said pointing at a colourful board. "That's a Papan Bunga."
Papan Bunga is a board used as banner in Medan and nearby towns. Small plastic flowers are arranged to form words and pasted onto the board.
"One board costs about 70,000 Rupiah, ibu," explained Pak Ramadhan. [ It's amusing being referred to as ibu which means mother by an older man, huhu]
One bonus of travelling small is to have the driver cum tourist guide providing extra information about the language, culture and people to us. Ours is responsible and reliable, not to mention very experienced driver. And that, alhamdulillah, is God-given for our holiday in Medan-Parapat-Berastagi.
Posted by aliya