I never believe in the old saying,'Like Mother, like son' until I have Ikram.
When he was born, we could not decide whether he takes after me or his father.
Now, at 5 months old, it's almost certain that he has my eyes and nose.
His PohPoh, my mother, said that I was a friendly child who didn't mind who carried me.And now Ikram is exactly like that; it's quite alarming the way he'd smile at total strangers. When we go to the restaurants for meals, strangers would come over to the table and ask to carry him. I'd have a hasty meal with my eyes on the temporary child minders, praying hard that they'd not run away with my precious baby. 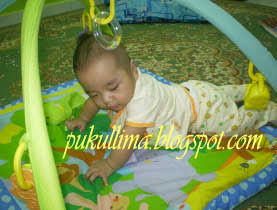 His PohPoh also said that I used to cough badly as a child and gave her a lot of headache finding a cure for me. Now, Ikram is coughing again. His coughs seems to linger; they'd appear, stay for a while and then stop, only to return with a vengeance. It's disheartening listening to him coughing.

I'm at my wits end - tried all sorts of prescribed medication for babies, honey and air zam-zam but he still coughs. And now he's infected me.

I dread taking him to the hospital again later in the week,and have the doctors frowning when they do their routine checkup on him. I've been warned that they might start on an anti-asthmatic medication [hope I got the term right] if he still wheezes and coughs.

I'd like to avoid it if possible. Can I say 'No' or "Wait a while' to the docs?
Posted by aliya

All the articles written under the label 'journey', 'that's life, folks', 'looking back' and 'as I see it' are true stories