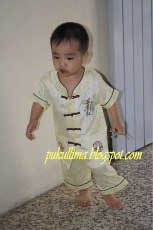 'Ikram, please be well behaved at Cho-Cho's house, ok?"
I reminded 19-month-old Ikram who's a little hyperactive nowadays and hardly keeps still. The children were already dressed in one of their Chinese costumes, which alhamdulillah, I managed to buy rather cheap at the hypermarkets.
We were on our way to my Grandma's house.


We had spent about an hour at my mother's house, where we had our  pre-packed halal rice for lunch and exchanged goodies. Mom was happy to meet her only grandchildren. After some small talk, we continued our CNY homecoming visit to Grandma's which was about 20 minutes away from my mother's.
"Where should we have our zohor prayer?"Hisband asked as it was already 2pm.
"There's a surau nearby, let's stop there first," I suggested. 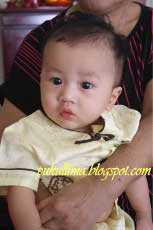 It turned out to be a mosque, situated right in the middle of a housing estate. Masjid Pengkalan Lebai Man.
When we reached Grandma's, both my uncles had arrived. They couldn't recognise me at first, as we had not met since 2006, the year of my reversion to Islam.
"Uncle, Happy New Year!" I called out to 2nd Uncle who was alone in the living room.
His eyes lighted up in recognition.
The rest of the clan were having late lunch, so we sat in the living room and waited for them to finish.
The result?

Alhamdulillah, despite not seeing each other for many years, they were positively welcoming me and my family. Nothing was ever asked regarding my decision to leave the ancestral worship and becoming a Muslim. I was a little apprehensive in the beginning, because being the only person who has left ancestral worship and reverting to Islam, I was prepared to face some tough questions. I was wrong. They were friendly and smiling, seemingly happy to see  my family and I. Husband had to get used to listening to them calling me in my Chinese name, and in respect for him and my Singaporean aunt, we spoke mainly in English.
sh. 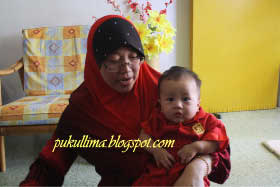 "Have you taken your lunch? We bought pizza for you. You eat pizza?" asked 3rd aunt.
"Yes, we do. We just had lunch, but thanks a lot."
Tradition dictates that as a married woman, I give goodies bags to the elders. Fortunately I brought enough for everyone, with maximum stuff for Grandma, of course.
"This is for you. The pistachios are from Dubai, and I was told it's halal. The kek lapis is from Indonesia, also halal." said 3rd aunt as she handed me the goodies bag.
3rd aunt is always specially generous, but I was touched by the trouble she had gone through in ensuring the stuff are halal.
"Why didn't you take off your tudung?" Grandma asked me, noticing that the red tudung was still on my head. She didn't look happy.
I smiled. I didn't want her to feel offended by telling the truth, that I was on standby in case neighbours or my cousin's husband came. She might not understand. So I said," My hair is dropping a lot, and I don't want them to drop everywhere on the floor. Can't sweep the floor today, maa.."
Thankfully, Grandma didn't bring up the issue after that.

Grandma kept quiet after that.

Naturally, Ikram and Ihsan became the centre of attention. Chinese still like boys, and to arrive with 2 great-grandchildren in their Chinese costumes seemed to please the elders. Thankfully too, both boys are not shy or clingy. I could simply put baby Ihsan into his granduncle's or GongGong's [grandpa's] arms and walk away. Good PR, boys, hehehee. 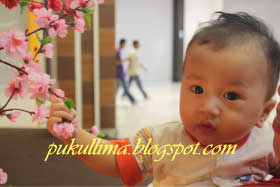 And after about 2 hours there, we finally made our move just as Ikram started to get cranky and bored with all the attention. Alhamdulillah, mission accomplished, hehehee.. now we will be able to return home to Grandma's easily without fearing negative comments from my close relatives. And the children received lots of ang pows this year, more than I had expected :)

And guess what?
We still have uncooked food for steamboat tomorrow :))

Posted by aliya No comments:

Happy Chinese New Year to all those celebrating this festival... xin nian kuai le, wan xi ru yi :)
It's been a busy week of meetings, shopping, rushing from here to there, etc.. and am in the middle of a family crisis now, huhu..
The children are fine, though, and insyaAllah we'll be celebrating in my hometown tomorrow.
Will update with some surprises later.
In the mean time, have a great time and happy holidays :)
Posted by aliya 2 comments: